Just north of Lihue sits Wailua Falls, one of the most famous and picturesque waterfalls on the island. Two tiers of water fall 80 feet into a 30-foot deep pool, all surrounded by a lush tropical jungle. One of the most photographed waterfalls on Kauai, Wailua Falls came to international fame when featured in the long-running television show Fantasy Island.

Unlike many of Kauai’s waterfalls, Wailua Falls is easily accessible by car, and the viewing station is only a few feet from the parking area. The twin-tiered falls, always an impressive sight, become truly wondrous when the sun strikes the water just right, creating a rainbow reaching out from the bottom of the falls into the mist. 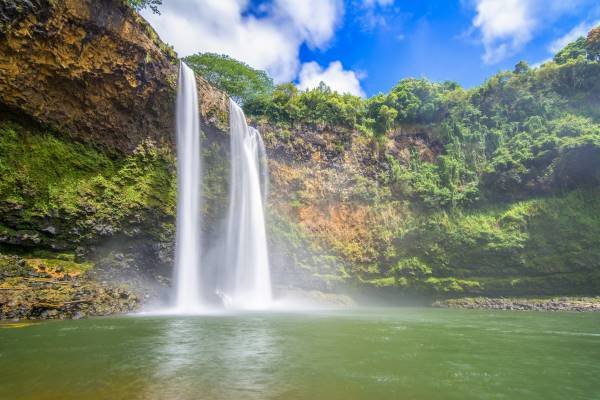 Wailua Falls History
Wailua Falls is said to be a place where ancient Hawaiian warriors and ali’i, or royalty, came to prove their bravery. Legend claims warriors would leap from the top of the falls to the pool below. The occasional person has tried to replicate this feat and people have died in the attempt. It’s much safer, and more sensible, to admire the falls from the viewing area.

On a similar note, while there are trails leading to the bottom of Wailua falls, they are both slippery and treacherous. Kauai County strongly advises against using these trails, as warnings at both trailheads make clear.

Wailua Falls and Rainfall
Normally, Wailua Falls is a double-tiered waterfall. When the river is high, a third tier sometimes appears. After periods of heavy rain, the usually tranquil scene is replaced by a single, roaring waterfall stained red-brown with Kauai’s famous red dirt and the pool below becomes a cauldron of swirling water. It’s an impressive sight, but most people would agree the falls are at their best when water flow allows for the double tier.

Getting to Wailua Falls

To reach Wailua Falls, head north from Lihue on Highway 56. Right after mile marker 1 turn on to Maalo Road. Drive to the end of the road and you’ll find a small parking lot and the falls’ viewing area. Parking is limited.