On December 7, 1941 at 7:48 am, 343 Imperial Japanese aircraft and a small fleet of midget submarines attacked Pearl Harbor. Over the course of two hours 2,403 American servicemen died, 1,178 were wounded, and 18 ships were lost or damaged, including the USS Arizona. It was a devastating attack heralding America’s entry into World War II and sending shock waves throughout the nation.

Today, Pearl Harbor is one of Oahu’s most popular tourist destinations—a solemn but fascinating glimpse into one of the darkest days in U.S. history. 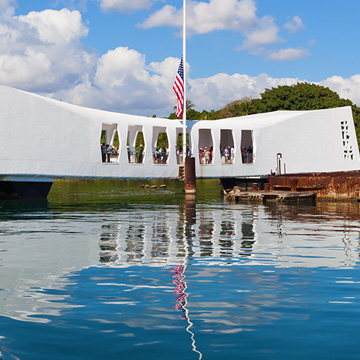 Pearl Harbor’s main attractions include the USS Arizona Memorial, the USS Missouri, The USS Bowfin Submarine Museum and Park, and the Pacific Aviation Museum. To get the most out of your visit, we recommend taking a full day to tour all four attractions.

The USS Arizona Memorial
For many, the USS Arizona Memorial epitomizes Pearl Harbor. Built over the submerged wreckage of the USS Arizona, the memorial pays tribute to the crewmen who died during the attack. Of the 2,403 people who died that day, 1,177 were aboard the Arizona, and for many of them the Arizona became their final resting place. Access to the memorial is by a 150-passenger US Navy-operated boat. Admission is free, although many tour groups offer guided tours. We recommend the $7.50 self-guided narration tour, which you can purchase at the Pearl Harbor Visitor Center. While visiting the memorial, it’s possible to spot small schools of eagle rays swimming in the water nearby. 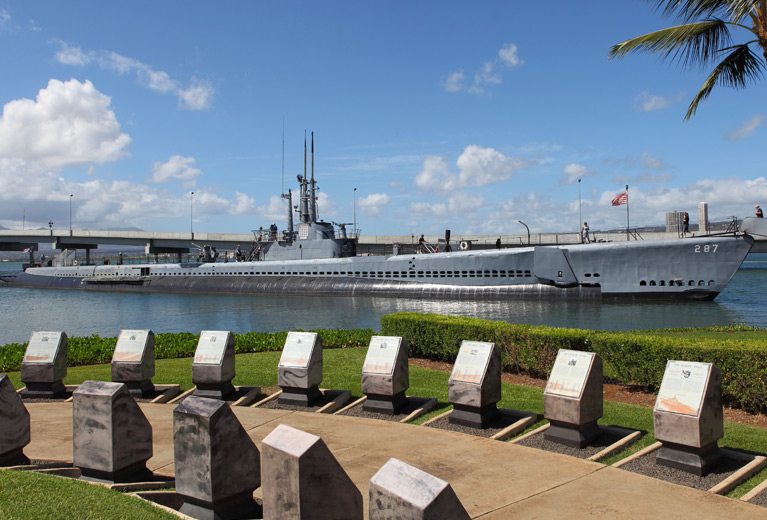 USS Bowfin Submarine Museum and Park
One of the most fascinating attractions in Pearl Harbor (and perhaps the most kid-friendly), the USS Bowfin Submarine Museum and Park offers a chance to board the USS Bowfin, a WWII-era submarine. Located close to the Pearl Harbor Visitor Center, the museum lets you experience the cramped close quarters of submarine life.

Ford Island Attractions
Shuttle buses depart from the Pearl Harbor Visitor Center for Ford Island every fifteen minutes. On the island you can tour the USS Missouri, where the Japanese formally surrendered, ending World War II. Also on Ford Island is the Pacific Aviation Museum, where you can view Ford Island’s damaged air field and control tower. The museum’s main attraction, however, is an impressive collection of vintage airplanes stored in two massive WWII-era hangers. Finally, take a moment to visit the USS Oklahoma memorial. Less well known than the Arizona memorial, this marble memorial honors the 429 men who lost their lives aboard the Oklahoma.

Admission to the Pearl Harbor Visitor Center and the USS Arizona is free, with boat tickets out to the USS Arizona Memorial prices at $1.50 (1,300 free tickets are given out on a first come, first served basis). Other costs include:

If you’re planning on spending a full day at Pearl Harbor, your best choice is a Pearl Harbor Passport, which costs $72.00 for adults and $35.00 for kids. The passport grants you access to all the site’s attractions and self-guided narrated tours.

Pearl Harbor is open 362 days a year, closing only for Thanksgiving, Christmas and New Year’s Day. Free parking is available at the Pearl Harbor Visitor Center. As the harbor remains an active military installation, bags, backpacks and other items that could be used for concealment are prohibited. You can store bags at the USS Bowfin Submarine Museum and Park for $5.00 per item. A visit to Pearl Harbor is a solemn affair, filled with history and respect for those who gave their lives that fateful day in 1941. It’s a trip you’ll never forget.