Maui is home to many spectacular snorkel spots you can access from the shore, but to experience the best the island has to offer you need to head out on a tour boat to Molokini and Turtle Arches. 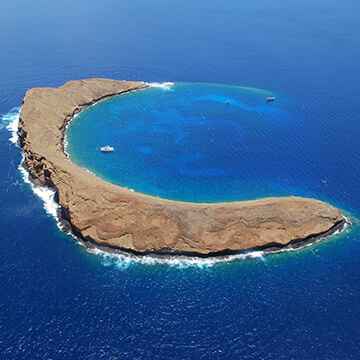 As soon as you duck your head underwater at Molokini, you realize you’re in for a world-class snorkel experience. Butterflyfish, triggerfish, parrotfish and 250 other species of fish surround you in crystal clear water. If you're lucky, you will spot a white-tipped reef shark or manta ray, or even one of Hawaii’s critically endangered monk seals. (Protip: give the reef most of your attention, but occasionally look out into the deeper blue water. You'll have 150-foot visibility, and might just spot some of the larger pelagic fish).

The remains of an ancient volcanic cone, Molokini forms a crescent shape in the Alalakeiki Channel between Maui and Kahoolawe. The crescent protects the snorkel area from the strong currents of the channel. The reef is a protected conservation area, and can only be accessed by boats run by tour operators. Wedge-tailed shearwaters and Bulwer’s petrels nest on the crescent, and iwa, or frigate birds, are often present.

According to Hawaiian myths, Molokini was a mo`o--a lizard who could take on the shape of a beautiful woman. Molokini fell in love with a handsome man, but the volcano goddess Pele was a rival for his affections. Pele, known for her temper, cut Molokini in two and turned the unlucky mo`o into stone. The Molokini crater is said to be Molokini’s tail, and her head is Pu’u Olai, the cinder cone by Makena Beach.

After snorkeling Molokini, many tour operators stop for a second snorkel at Turtle Arches. Turtle Arches is a series of underwater arch formations covers with algae, an important part of the Hawaiian green sea turtle (honu) diet.

Honu are a protected species, so do not chase, touch or harass them. Turtles are inquisitive and often approach snorkelers to check them out. Hang out quietly on the surface gives you the best chance of attracting a curious turtle.

The only way to access Molokini is by booking passage on a tour boat. Tour boats regularly leave Maalaea Harbor and the Kihei Boat Ramp heading for Molokini.