The Big Island of Hawaii is known for its black sand beaches, formed when hot lava meets the ocean and fire collide with water. Kilauea Volcano’s 2018 Lower East Side Eruption created seven new black sand beaches. Of these seven beaches, the most accessible is at Pohoiki, also known as Isaac Hale Beach Park. 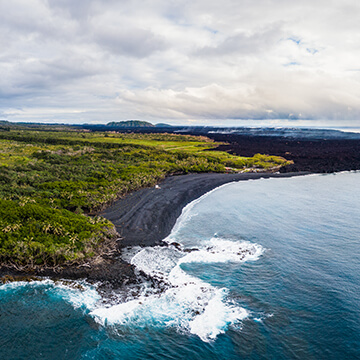 Black Sand: Beauty out of Chaos

Black sand beaches are rare occurrences--the Big Island is one of the few places on earth where they’re found. When lava flows meet the ocean, the lava cools rapidly, fragmenting or exploding violently into pieces of lava cinder. Ocean waves break these fragments into fine black sand. 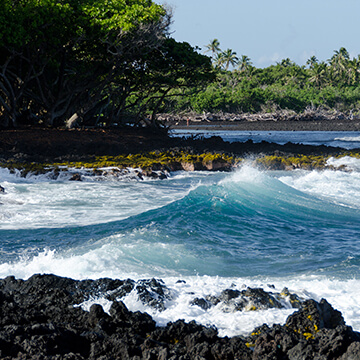 Isaac Hale Beach Park
Pohoiki, or Isaac Hale Beach Park, only just avoided being buried beneath lava. The park’s boat ramp was spared, and a new black sand beach formed. At present, the beach is quite steep and the sand coarse, having yet to be ground into fine sand by wave action. Swimming off the beach is not recommended due to strong rip currents.

In addition to the new beach, the 2018 eruption created four natural ocean thermal pools in the park. Entering these polls is not advisable, as they are not disinfected, and bacteria breed rapidly in the hot water.

New Road, Limited Facilities
For much of 2018, lava flows blocked access to Pohoiki, and the beach was only accessible after an arduous and dangerous hike. As of December of 2018, a new road runs to the park. 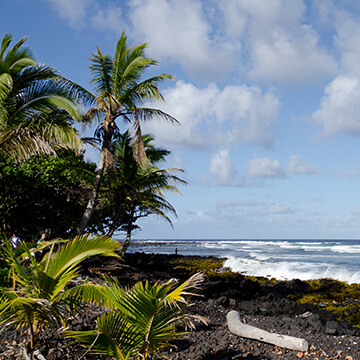 While the park is open, Pohoiki does not have many amenities. As a result of the eruption, there is no running water or plumbing, although there are portable toilets available. Camping is prohibited until further notice, and the park itself is only open from 9:00 a.m. to 6:00 p.m.
See the Beach Before it's Gone
Black sand beaches have limited lifespans. Once the lava stops flowing, no new lava cinders are created to replenish the sand. Eventually, the same wave action pounding the lava into fine sand may carry the sand away.

Human needs may also affect the beach. The Pohoiki boat ramp is important for local fishing and tour operations. To restore the ramp, the surrounding area may one day be dredged. No-one knows what effect if any this will have on the beach.  Pohoiki’s black sand beach may well be temporary, so if you're on the Big Island, be sure to see it while it’s still here.

You may not be able to trust your GPS to get you to Pohoiki: many of the road closures caused by recent lava flows are not yet reflected on GPS maps.

To get to Pohoiki from Pahoa, follow Highway 130 to the end of the road and turn left onto Highway 136 in the Puna District. Isaac Hale Beach Park is at the intersection of Highway 136 and Pohoiki Road.