Check Out the Nuuanu Pali Lookout

A five-mile drive from the hustle and bustle of Waikiki brings you to the Nuuanu Pali Lookout, 1,200 feet above sea level. To your back, the sheer Koolau cliffs tower towards the clouds. Below you lies most of windward Oahu and the seemingly unending Pacific. It’s one of the best views on Oahu, and well worth the short drive through the interior’s impressive, rainforest-draped mountains.

Looking down the Pali, to your right lies  sparking Kailua Bay and Kaneohe Bay with its four tiny islands, including the University of Hawaii’s marine biology research center, Coconut Island. Other notable landmarks include the Kaneohe Marine Corp Base and the Hoomaluhia Botanical Garden.

Pali means “cliffs” in Hawaiian, and Nuuanu means “cool heights.” It’s a well-earned name, as the temperature this high above sea level is usually five degrees cooler than Honolulu and the lookout is known for extremely blustery winds. This is not the place to wear your favorite hat unless you want to watch it fly over the Pali!

Beautiful Scenery and a Violent Past

Surrounded by rainforest, spectacular cliffs, and an unimpeded view of the Pacific, it’s hard to imagine Nuuanu Pali was the site of one of the most vicious battles in Hawaiian history. Yet back in May of 1795, it was where the forces of Kalanikūpule, King of Oahu, fought a desperate defense against the invading forces of Kamehameha I, then King of the Big Island.

Kamehameha’s 10,000-man army, aided with firearms from trading with western ships, drove Kalanikūpule’s forces into Nuuanu Valley and up against the Pali. Rather than surrender, hundreds of men jumped from the cliffs to their deaths. Centuries after the battle, roadwork teams uncovered 800 skulls at the bottom of the Pali, all that remained of the doomed Oahu forces.

The battle of Nuuanu is known as Kalelekaanae (“leaping mullet”)  and proved a decisive point in Kamehameha’s quest to unite the islands under one ruler—a mission he accomplished in 1810 when the island of Kauai signed a treaty giving Kamehameha control of the island chain. 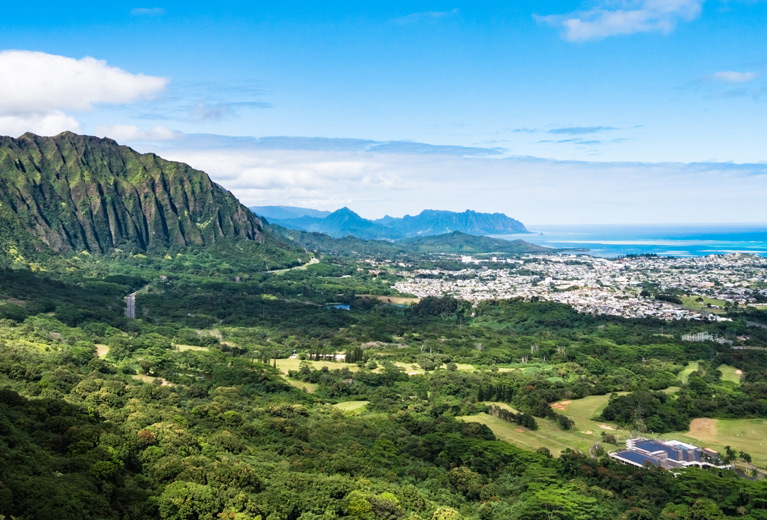 Nuuanu Pali has its share of legends and ghost stories. One of the most popular is the legend of the ghost dog. Local lore claims if you ever see the ghost dog, turn back or face disaster. Another legend claims a moo wahine ("lizard woman") lives in Nuuanu Pass, where she takes the form of a beautiful woman to lure male travelers over the pali to their deaths. Chances are if you see any dogs or beautiful women on your trip to the lookout, they’re of the earthly variety, but you never know . . .

It’s also kapu or "taboo", to carry pork through the Nuuanu Pali, and cars carrying pork are supposed to stop working until the pork is removed. The legend stems from a disagreement between Pele, the goddess of volcanoes, and the half-human, half-pig god Kamapuaa. To appease the spirits, pork can be tied in a fresh green ti leaf, banana leaf, or a strip of bamboo.

Getting to the Nuuanu Pali