Diamond Head is one of Oahu’s most recognizable landmarks—a 760-foot tall volcanic cone poised on the eastern edge of Honolulu. Thousands of people hike Diamond Head to experience the unforgettable view at the top of the crater’s summit.

Diamond Head got its English name in the 1800s, when British sailors mistook glitter stones in the crater for diamonds.

The Hawaiians call Diamond Head Le-ahi, or “ahi forehead” for the way the crater resembles the forehead of an ahi tuna. Ancient Hawaiians lit navigation fires on the summit to guide canoes, and built a heiau, or temple, to the god of wind to protect the fires from strong updrafts that could extinguish them. 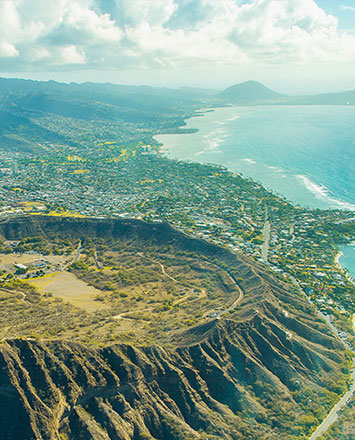 The crater itself dates back 300,000 years, to a time when O’ahu was still volcanically active. A massive single eruption hurled ash and rock into the air. When the debris fell back to earth it cemented into a type of volcanic rock called tuff and created the crater.

Hike Diamond Head
We can hike Diamond Head thanks to the U.S. army, which created the trail to the summit in 1908. At the time, the crater was part of the Fort Ruger Military base, and artillery, cement bunkers, and an observation deck were built on the summit.

Today, Diamond Head is a state national park. the trail is a moderately strenuous hike switchbacking up the inside of the crater until it reaches a 200-foot-long tunnel leading to a lookout on the summit. There you can enjoy 360-degree views of Honolulu, the Ko’olau Mountains, and the eastern side of the island all the way up to Koko Head Crater.

Admission to the park is $5.00* per person (free for Hawaii residents). Out-of-state visitors must have an advanced reservation to enter Diamond Head State Monument.

You are leaving AquaAston.com to visit the Diamond Head State Monument website.


By clicking "continue" below, you acknowledge being transferred to a website that is not owned, operated or controlled by Aqua-Aston Hospitality, LLC (“AAH”), and that AAH is not responsible for information or activities associated with such website. Further, you acknowledge that AAH shall not be liable to you or any third party for any claims, damages, or losses of any kind that may result from your use of such website.

How to Get to Diamond Head

If you don’t mind adding an hour to your hike, you can walk to the park entrance from Waikiki, or you can hop on the Waikiki Trolley, which visits many of Honolulu’s most popular destinations.

After you pass 18th Avenue on your right, take the next left towards the crater. The road will go through a tunnel taking you to the center of the crater, where you’ll find restrooms, lunch trucks, picnic areas, and water fountains.