Although it is part of the SeaWorld® and Busch Gardens® family of theme parks, Discovery Cove® differs from the usual hustle and bustle of heavily packed theme parks by focusing on hands-on animal encounters. At Discovery Cove® you don’t have to worry about large crowds or turnstiles. This park instead offers an all-inclusive experience with beautiful beaches and aquatic adventures that are both relaxing and fun for the whole family. 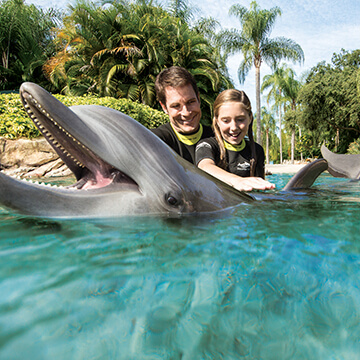 This is probably the most popular attraction in Discovery Cove®. The Dolphin Pool gives guests a chance to swim with dolphins. First you'll meet a dolphin in the Cove’s swimming areas, where a trainer teaches you a little about the habits and behavior of these fascinating sea mammals. After a photo op with the dolphin, it’s time to swim with them. Anyone who is not afraid of the deep water has a chance to ride along holding onto a dorsal fin for a once-in-a-lifetime opportunity. 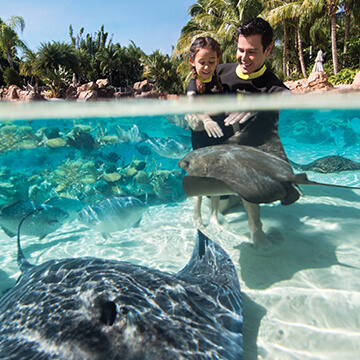 rkel the Grand Reef
The Grand Reef is home to 125 species of sea life, including eagle rays, stunning tropical fish and colorful invertebrates. Snorkeling the reef is made more thrilling by the presence of sharks that are safely enclosed behind protective glass. Above the reef, paths and bridges lead to islands and hidden grottos where you can watch the reef’s many denizens go about their day.

Explorer’s Aviary and the Freshwater Oasis
Discovery Cove® isn’t just about ocean life. The Explorer's Aviary is a free-flight enclosure containing over 270 species of exotic birds, many of which can be hand fed. If otters and marmosets are more your thing, drop by the Freshwater Oasis.

Discovery Cove® is an all-inclusive resort. Your entry fee includes unlimited food and drink, towels, snorkeling gear and other amenities. Cost for a one-day pass, including the Dolphin Swim, costs $199. Special events, such as the Trainer for a Day program is an additional cost. You can also purchase park packages that include admission to Seaworld, Aquatica, and Busch Gardens.