Part of the Walt Disney World® Resort, Disney’s Animal Kingdom® Theme Park is the largest theme park in the world. There you will find 580 acres of rides and animal habitats just waiting to be explored. The park is designed to provide rides and thrills guests expect from Walt Disney World® Resort without causing the animals any discomfort and is dedicated to worldwide animal conservation.

While the stars of the Disney’s Animal Kingdom® Theme Park are definitely the animals, the park is also home to long-dead dinosaurs and the breathtaking beasts that call the moon of Pandora- The World of Avatar home. It will take at least a day to experience everything the park has to offer. 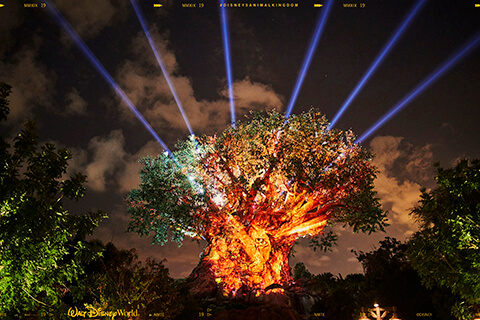 The Tree of Life

The centerpiece of the park, the Tree of Life is an enormous artificial Boab tree that stands 145-feet high. Inside the 50-foot wide trunk, guests can watch the It’s Tough to be a Bug!® 3D movie, based on Pixar’s A Bug’s Life.
Africa
The oldest of the animal attractions at the park, Africa offers a chance to visit the fictional village of Harambe and take an open-sided safari tour to view wild dogs, hyena, rhino, cheetah, giraffe, and elephant. The park’s rhinos and elephants have both calved in the past, and some of the park’s rhinos have been reintroduced into the African Wilds.

Rafiki’s Planet Watch
Connected to Africa by the Wildlife Express Train is Rafiki’s Animal Watch, where guests can tour the park’s behind the scenes facilities, learn how to create wildlife habitats around their own homes, and interact with a variety of domesticated animals at the petting zoo.
Pandora- The World of Avatar
One of Disney’s Animal Kingdom® Theme Park newest attractions, Pandora- The World of Avatar opens up the lush moon from James Cameron’s Avatar for exploration. Take a hair-raising ride on a banshee over Pandora in a 3D augmented reality flight simulator, and enjoy a boat ride through the eerie glowing rainforests the Na'vi call home.
Asia
In the Asia portion of the Disney’s Animal Kingdom® Theme Park, thrill-seekers can ride the Expedition Everest-Legend of the Forbidden Mountain® roller coaster (watch out for the Yeti) or get wet on the Kali River Rapids® ride. While in Asia, be sure to check out the UP!  A Great Bird Adventure show, and learn a little about bird behavior from expert trainers. 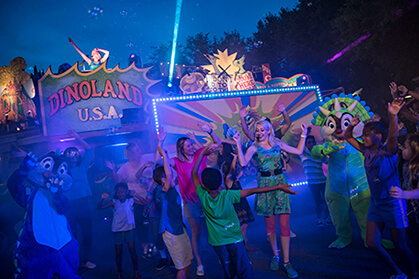 DinoLand USA®
We promised dinosaurs at the beginning of this article, didn’t we? The Disney’s Animal Kingdom® Theme Park provides all the prehistoric thrills you could ask for with DinoLand USA®. Guests can take a trip to the Late Cretaceous on the DINOSAUR dark thrill ride, or get dizzy on the Primeval Whirl® spinning roller coaster.
Add To My Travel Log